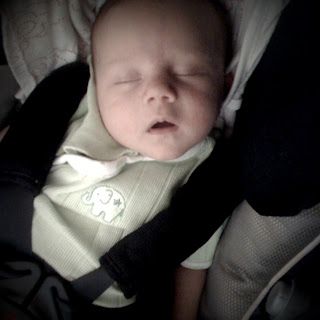 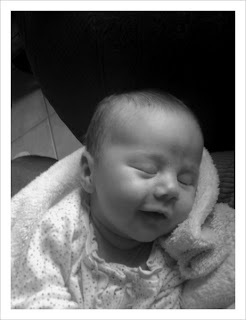 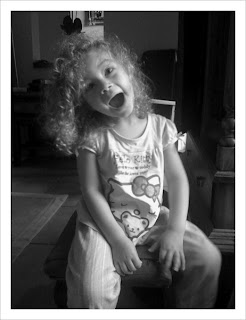 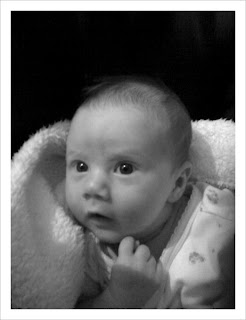 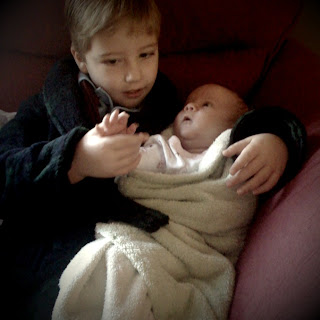 The last 5 weeks have been fantastic, exciting, exhausting, challenging, hard and great all at the same time. I somehow manage to survive on about 3-4hrs sleep a night, despite going to bed at about 8.30, or as soon as Poppy and Joey are settled. I think I can just about function on this little sleep, although, I'm sure I come across as 'extra blonde' and pretty tongue tied to people who don't know what my life entails, I just can't seem to think fast enough to give sensible answers to pretty obvious questions!
Lucy was 5 weeks on Wednesday and apart from a little heat rash, she's doing brilliantly. She was weighed by the health visitor yesterday and is now 10Ibs 4oz, amazing since she lost so much after her birth. She's like a little weighted beanie bear, very satisfying to hold and cuddle. She started smiling at 4 weeks, such sweet little shy smiles and now she does it all the time, it's soo lovely and just makes my heart melt. She is now also making little noises which sound like gurggles or chuckles, she laughs in her sleep and is starting to get into a routine. She still wants to feed all the time, and tends to snack, but she has good and bad alternate days and is very very clingy with the 'milk bar'. She doesn't settle easily or well if I'm not holding her, and calms right away if I take her from somebody else. I'm pretty sure that this is just because she knows that i'm her next meal, and that this will change as she gets older. I had to top her up with formula in the first few weeks, only once a day, but now she is exclusively fed by me, and I'm managing just fine.
Poppy is still giving me a run for my money. She loves Lucy but, apart from the fact that its a difficult age to be going through, she has definitely shown some attention seeking behaviour. She has melt downs more often and gets upset by the strangest things seemingly out of nowhere. We just give her lots of love and cuddles and include her as much as we can with Lucy and on her own. It's getting better and hopefully it will continue to improve.
School runs are an absolute nightmare. Imagine, driving through the busiest town, that all the Brisbane traffic drives through on the way to the city, in rush hour and with aggressive stupid people who refuse to give way. And then imagine, collecting a very hyper Joey, and a very slow dreamy Daisy with her head in the clouds, all the while trying to hang onto a 3yr old who wants to run off if you so much as let go of her hand, and trying to hold onto a baby at the same time! We're not talking about a rural quiet school either, it's very chaotic, with kids running all over the place, lots of steps to go up and down and main roads to try and cross. It's particularly lovely when Poppy decides to 'chuck a wobbly' as Great Aunt Virginia would say, and hit, bite and scream 'I hate you' her way across the road, with about 50 other people all trying to cross at the same time, all of them looking at you as though you are mad - which you probably are! I have found that carrying Lucy in a ring sling helps, it at least leaves me with one free hand to cling onto Poppy with!
The good news is that I wont have to do this for much longer. We finally went unconditional on our house today, so we move in about 9 weeks, yippeee! Joey and Daisy will move schools to one nearer, it doesn't have steps, or fast roads, instead it has a 'hug and drop', which means I roll up alongside the school in my car, give them big kisses and then turf them out straight into the school grounds, and move along leaving the car behind me to do the same.....bliss!
The new house is also very exciting, apart from being dirt poor for a few years, and surviving on about 100 pounds a week, (not easy for 9 people), we will be much happier there and we really can't wait to have our own place at last.
The rest of the kids are fine and although I'm having to 'crack the whip' a bit with some of them, we are managing to run this house in some sort of order and routine. I just hope that I can keep juggling all the balls and not let any of them drop, because once you drop one, they all fall and you've had it. Hope you like the recent pics of Lucy - she's changing as you can see and I'm trying to make the most of all her sweet little milestones.
Posted by Emma at 3:58 PM